Theatre seniors practice a fight scene for the play "An Experiment" 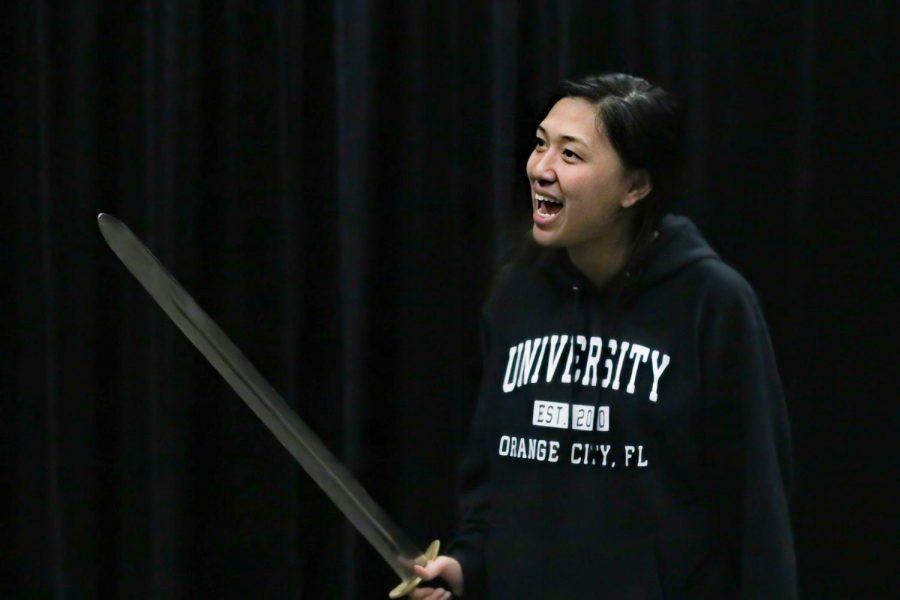 With a vision of a gory sword fight in Brent Holland’s “An Experiment”, seniors Ethan Crane (Courageous) and Tammy Nguyen (Impulsive) needed help rehearsing their fight scene. With little experience in on-stage fighting, Stetson University stage combat instructors came by to teach Crane and Nguyen the choreography and proper technique.

“When the instructors came in to teach us their original choreography, it was very difficult,” Nguyen said. “I had this roll I had to do, and I practiced for weeks but I still couldn’t roll properly. So, we had to scrap some of the moves they originally had in mind so that they could fit us.”

Both actors had trouble learning these new combat techniques. While Nguyen was having difficulties with her rolling, Crane was struggling with his grabbing.

“If I were to grab Tammy’s wrist with my thumb separate from the rest of my fingers, I would risk injuring her,” Crane said. “You have to train your mind to do every small movement properly in order to make sure everyone stays safe.”

Getting the choreography down was a big challenge for both Crane and Nguyen. With swords whipped around and punches thrown, nerves are something that the actor and actress have to overcome.

“The scene where Ethan swings the sword underneath me and I have to jump over it has always been the most difficult for us,” Nguyen said. “We are both hesitant before he swings, or I jump. There is a brief moment where we just stare at each other on stage. The practice was a big thing that helped us get it down. We’ve rehearsed it so many times that it has kind of become muscle memory. It’s still very scary to do, but once we’re actually performing the scene, it just flows.”